I witnessed Death in the Eyes of a Gunman 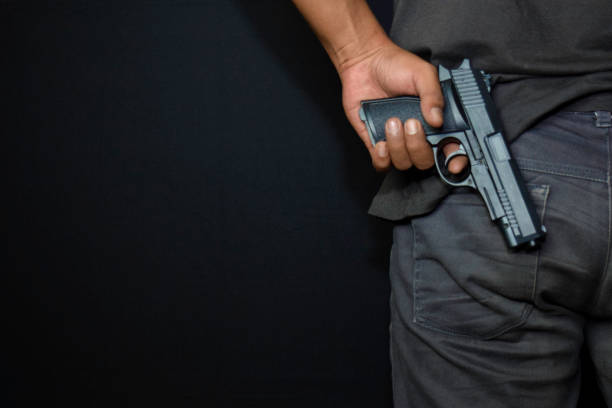 It was a beautiful Thursday morning, and I awoke at six a.m., as usual, with nothing out of place. I was still unemployed, worried, poor, and alone in a room that could hardly be called a bedroom.

I usually pray before stepping foot on the ground, thanking God for everything and appreciating the fact that I am still alive, even though I had only eaten two slices of bread for three days in a row, but I was grateful to be alive and well.

I got up from where I usually lay my head every night, on a mattress as thin as a slice of bread, stretched, and walked outside to collect water and have a bath. After a brief bath, I went next door to my mother's room, knocked, and she responded and invited me in.

My mother, a sixty-year-old widow with diabetes, had been bedridden for seven years after her legs were amputated due to wounds she sustained years ago. When I greeted her and asked how she was, she gave me a faint smile and said she was fine, but deep down I knew that wasn't the case because, like me, she struggled with hunger and stress.

"My son, there is no one in the world that I love more than you. I am happy to see you doing well every day. I pray that God protects you from harm. I'd give my life for you," she said.

Unlike other days, she grabbed my hand and asked me to sit down. In her eyes, I saw wariness and despair; she faintly tried to speak to me. She said, "My son, there is no one in the world that I love more than you. I am happy to see you."

I kissed her on the forehead and she smiled as I stepped out to start my day, unsure of where I was going or what I would do to earn money for our next meal. As I walked further down the streets, my steps became heavier.

I started to remember my university days, when I would sit with my friends and daydream about how we would have high-paying jobs, beautiful wives, houses, and cars, and how we would drive around the city to enjoy the views.

Little did I know that life would take a drastic turn after my Dad's terrible accident, which took his life and my future, as I could no longer pay fees because all the money he had was spent on my mother’s medical bills.

I suddenly found myself in Kariakoo.

On this day, after a long walk from my home in the Kurasini Suburbs, I thought to myself, "Maybe I can look for cleaning jobs at Indian-owned stores."

However, each shop I visited was greeted by a bunch of angry maids, who I soon realised perform both cleaning and selling, indicating that if I asked for a job, I was threatening their job.

I kept on walking until I found myself in the city centre. By then, it was already noon and the harsh sun was piercing my skin.

I was tired, thirsty, hungry and confused. I had already lost half a day without earning a penny in my pocket. The odds were not in my favor.

I walked a long way, but as I approached Palm Beach, I noticed some traffic piling up, which sparked my curiosity because it was just midday, and most people are at their offices, so you hardly see traffic on a work day like this.

I strolled over to the Oysterbay police station, eager to see what was causing the traffic jam.

I was moving faster than usual, and you could almost say I was starting to run, when I heard gunshots!!!

As you can see, gunshots and Dar Es Salaam do not go hand in hand; no one can recall the last time they heard gunshots, with the exception of that specific day.

The few policemen who were unarmed seemed confused. The drivers all around were moving at an irregular speed.

Shots were heard everywhere. Instead of walking, I was now running very fast across the station, where I thought I’d run towards the bridge and away from all the shooting.

Right after crossing the station, I came face to-face with the shooter, who we’ll all come to know as Hamza.

As his gun became evident to my eyes, my legs lost their strength to carry me.

I found myself sitting down and leaned on a light pole, as I couldn’t support my own body.

I looked up and came face to-face with the gunman for a brief minute, much like a pedestrian would stare through a car's window to make sure the driver spotted him and wouldn't run him over.

I stared into the shooter's eyes in fear of him blowing my brains out. I couldn’t breathe, move, or scream.

I just sat there staring at him, and all I could see through his eyes was a mix of anger and fear. I saw a man in pain, a man with a lot to say but nowhere to say it, a man who had been wronged beyond imaginable explanation, a man thirsty for justice but knowing he would never get it, and I saw DEATH in the eyes of the shooter.

The Journey Of A Tanzanian PODCASTER

How to create an influencer marketing strategy